​Analog Xperience offers a powerful and flexible analog extension. It is the most comprehensive EASY SOUNDS soundlibrary ever for a Yamaha synthesizer. It covers all important sound categories of analog synthesizers with a big variety of performances.

The performances reflect the history of analog synth sounds. Special attention is paid to popular sounds of the 70s and 80s as well as modern Pop / Dance / Funk / Rock sounds.

The sound library "Analog Xperience" is based on multi samples of some of the most popular analog synths of the past decades.A total of 46 User Waveforms are from the Minimoog, still the most popular monophonic synthesizer of all time. Another 28 User Waveforms are from Roland Jupiter-8, one of the most important flagships of polyphonic synthesizers. In addition, the library contains a total of 13 Waveforms, which have been produced with Oberheim Matrix-12, Clavia Nord Lead 2 and Access Virus Indigo.

Referring to the User Waveforms, the sampling concept "Pluck & Sustain", newly developed by EASY SOUNDS, was used for the first time at Analog Xperience. It combines Pluck elements and Sustain elements to create an authentic and flexible modifiable sound. This is realized by separate multi samples for the attack phase (attack or decay as one shot samples) and the sustain phase (as loop samples). This prevents the sound processed in the performances from being strongly influenced by the properties of the filters and envelopes of the hardware synth, and a big portion of authenticity would be lost. A significant advantage of this concept is that with limited memory requirements a variety of authentic sound variations can be realized. From a sampled original sound, several decay and attack variants are available, which can be combined with the same loop multi sample.

SLIDER MIX Multi Part Performances
A completely new type of complex Multi Part Performances are the SLIDER MIX Performances, in which the 8 sliders can be used to create an individual, intuitive and flowing arrangement in realtime.
All SLIDER MIX Performances contain 8 Parts and 8 Scenes. Unlike before, however, the scenes only refer to Parts 7 (bass) and 8 (drums). All other parts remain unaffected by the selection of Scenes.
Part 1 (Lead - right Manual) and Part 2 (Pad - left Manual) are PLAY parts that do not use arpeggios. Parts 3 through 8 are Arpeggio Parts.
In the default setting of the performance (Scene 1), only the PLAY parts (LEFT + RIGHT) are initially played. The other arpeggio parts are already active, but initially set to volume 0. They can be faded in or out very flexible.
Part 8 (Drums) is only played in Scenes 2 - 8.
Song-related Performances (“Cover Performances”)
Analog Xperience contains  totally 44 Performances based on popular music titles. These so-called Cover Performances form a block that starts with the Performance "Highway Cars" (Category Selection User + All) and ends with "The Final Lead". The first five Performances of this block are complex Multi Part Performances, including arpeggio parts. The other 39 Performances are Single Part Performances. As a rule, several consecutive Performances are related to a song.
Easy Edit
One of the most important features of this product are the different layouts for the assignment of COMMON Assignable Knobs, which allows a transparent "Easy Edit".
Similar Assign Knob layouts are used for a series of Performances. Consistent use for multiple Performances greatly simplifies intuitive sound manipulation with the knobs and comes close to the handling of traditional analog synths.
Everyone who wants to realize sounds uninfluenced by an existing sound design has the option to  use the total of 77 Template Performances that can be found at the end of the library. These templates contain only default settings for creating your own sounds - either via "Easy Edit" with the Assignable Knobs or as "Full Edit" with Element Editing.
Analog Xperience and Phat Analog Series
The sound libraries Phat Analog I, II and III have been available for MONTAGE / MODX for some time now. Like Analog Xperience, these products are based on sample content. However, the User Waveforms, Samples and Performances of Analog Xperience have been produced new. It is by no means a remake of the Phat Analog Series, but a completely new product. In addition to the new content, consisting of Performances, User Waveforms, Samples and User Arpeggios, Analog Xperience also differs significantly from the previous products thanks to the new features described above, such as Pluck & Sustain Sampling, Slider Mix Performances, Cover Performances, Easy Edit and Assign Knob Layouts.
Analog Xperience and Phat Analog I, II, III complement each other perfectly. Together, these four libraries have a sample content of 630 MB, resulting in an outstanding collection of Analog Synthsounds.


This is a download-only product and will not be delivered on any other data media. If PayPal is the selected payment method the download links will be sent automatically after a successful transaction. 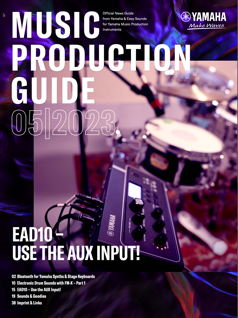